There is something a little odd happening in many companies right now when [...]

Total Experience (TX) is a concept that many business and technology leader[...]

Automate Your App-V To MSIX Conversion With Access Capture

Many enterprises are currently in the process of modernizing their application estates by converting their existing MSI apps and EXE files into MSIX packages. This is done to take advantage of the many benefits that come with MSIX like, for example, increased security as app packages remain current and up-to-date as they are easier to maintain, which leads to a reduction in the cost of ownership per application.

In 2006, Microsoft Application Virtualization (also known as App-V) was Microsoft’s first push into application virtualization and application streaming technology. Using App-V, end users don’t have to physically install an application onto their device. Instead, they access a centrally managed service. This has the benefit of being easier to maintain and manage by administrators but also reduces the chances of conflicts with other applications.

Over the past fifteen years, application (virtualization) management technology has drastically evolved. Now, enterprises are replacing their App-V either with CloudPaging or by converting them into MSIX. In addition, App-V 5 is going end-of-life on January 10, 2023, which doesn’t leave much time considering how many applications still need to be modernized.

Since November 2020, the “MSIX packaging tool natively converts a single App-V package to MSIX, removing the requirement to repackage them and a feature we [Microsoft] will make use of.” In addition to the MSIX packaging tool (which can be downloaded for free from Microsoft’s website) and your App-V packages in a folder, you will need a signing certificate, a signtool.exe (which is available for free as part of the Windows 10 Software Developer Kit), a conversion script, and an XML template.

For a single App-V or a few apps at a time, this approach works very well and, once set up, goes relatively fast. However, while it is technically possible to build this into a workflow by implementing PowerShell scripts and outputs, it is fairly complex. So if you have to test and potentially have to repackage an application portfolio of hundreds or even thousands of applications, you will need to have an automated workflow to manage this workload. In addition, by doing this manually (outside of your automated packaging and testing workflow), you end up with localized copies that are not centrally managed or standardized. 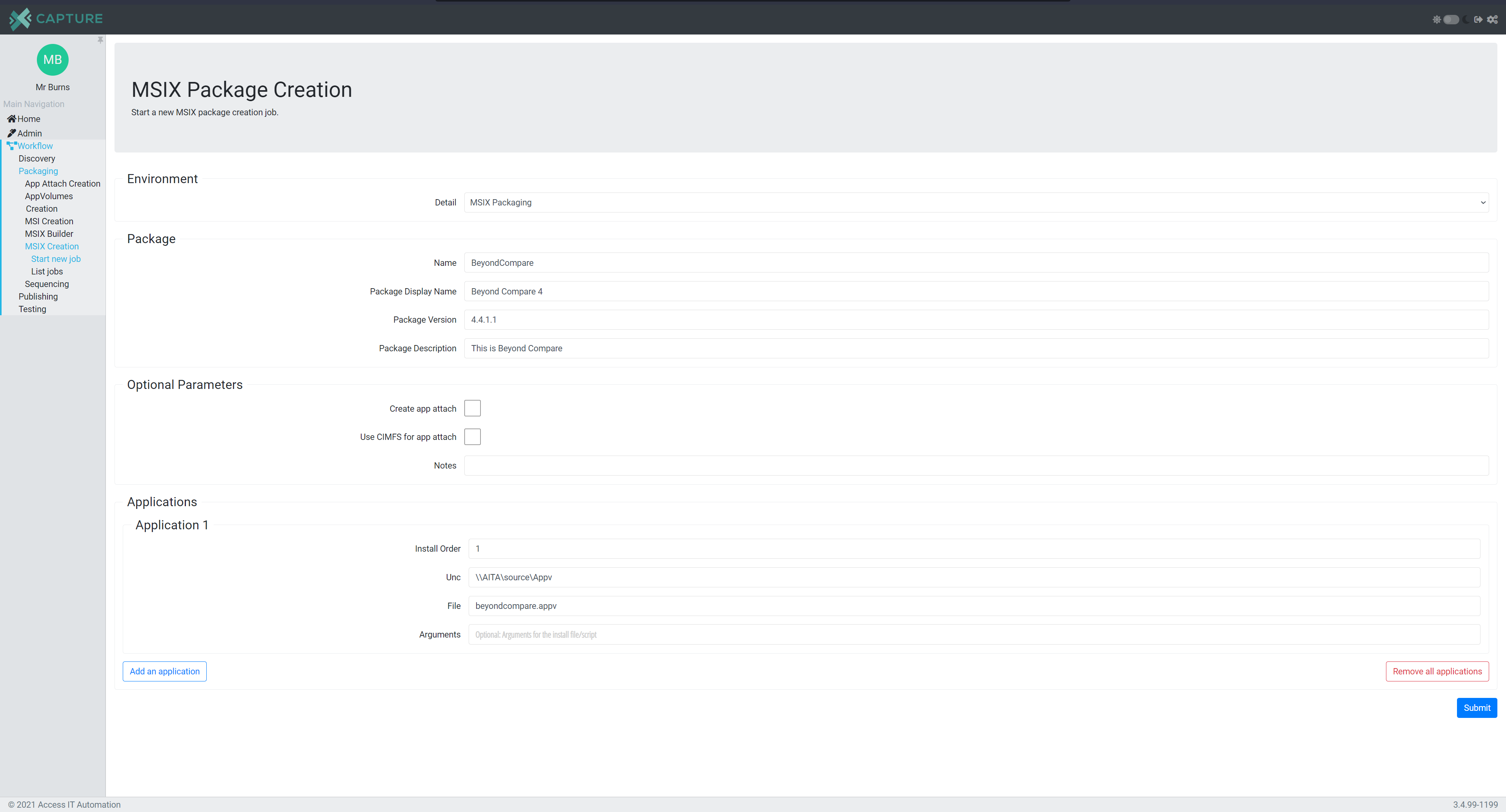 Automate Your App-V To MSIX Conversion With Access Capture

To alleviate this obstacle, we are happy to announce that you can now convert App-V applications into MSIX packages automatically and as part of your app packaging workflow — just like you would package MSI or any other applications — using Access Capture APIs. This means you can:

The process could not be any simpler. Just head into your Access Capture console and start a new packaging job in the “MSIX Creation” tab. This is simply done by providing a few details (such as your packaging name, version, and description), deciding whether or not you would like Capture to create an app attach and/or CIMFs for app attach, and setting some parameters like the order you want the application to be installed in if you have multiple apps to install, the link to the application package, and the file name. Usually, you would add some additional arguments, like a silent switch, but for App-V, this isn’t needed. Now click “Submit” and your app is being converted. That’s it!

If you have already been using Access Capture for your automated application packaging and testing, this is just an additional option for you to have access to now. But if you aren’t using Capture yet and you have a significant amount of applications to modernize that include App-V apps, this will definitely be a very helpful and exciting feature update!

The Difference Between VDI and Microsoft Azure Virtual Desktop

Ever since the introduction of Microsoft Azure Virtual Desktop (AVD), also formerly known as Windows […]

4 Things You Should Know Before Investing Your Leftover IT Budget

Things are finally looking up on the IT budget horizon. According to the 2019 State […]

Our free demonstrations provide you with the key features and functions of the products that matter most to you. Whether it is application packaging and testing, creating actionable insights, performance visualization and monitoring, we can help show you how to enable your modern desktop.