There is something a little odd happening in many companies right now when [...]

Total Experience (TX) is a concept that many business and technology leader[...]

Standard & Bespoke Fixes During & After Migrations

We are often asked this two-fold question: How do our IT Automation products address the currently known issues that exist in a client’s IT environment, and what happens when new issues are discovered, new apps or updates come into play, etc.? As an answer, this post will discuss, from a high level, our process for providing our clients with IT Automation that will take them into their target platform (i.e., Windows 10, Office 365, etc.) and explain how we use both standard and tailored fixes. 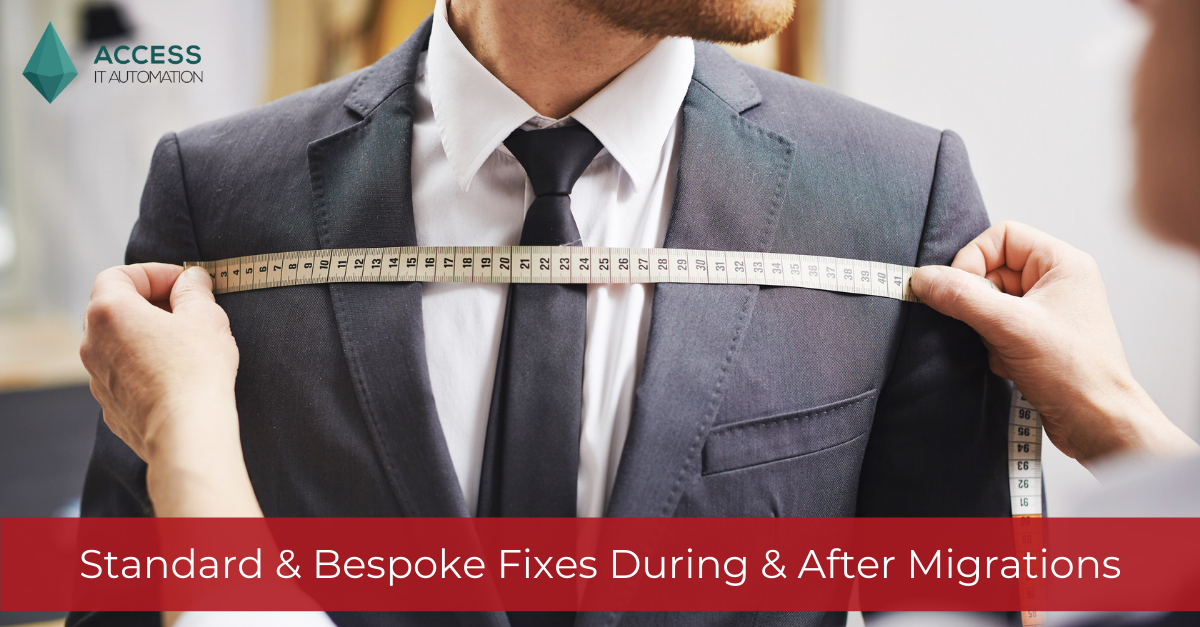 Creating Fixes When Starting A Migration

When migrating tens of thousands of users from Windows 7 to Windows 10, or migrating users to Office 365, or when taking on an email migration or any other large IT transformation project, proper tooling and planning is crucial in order to not have a project that becomes a major disruption and needs to be rescued. Since this is so important to the success of the project, when getting Access Symphony onto a client’s IT environment, we have a repository of fixes that are ready out of the box.

For example, imagine there is a known issue with a popular software (such as Adobe Acrobat, WinZip, etc.) and the vendor either hasn’t made a fix, or the fix is to upgrade to the newer version of the software. A significant amount of time and investment has gone into the testing and packaging of this software, not to mention license costs. By having this fix as part of our repository, you now have one less bump in the road to a smooth migration.

Our repository is always evolving. We add fixes as new issues arise from third-party vendors with the latest in modern desktop technology, and if a fix is no longer relevant, we remove it. While our standard set of fixes is a huge time saver, every organization has its own combination of apps, components, platforms, and different technologies. This creates a unique IT environment, which in turn can create a unique set of issues that would not exist in other organizations.

We tackle this problem in the engineering phase of implementing our solutions — Fix Engine and Symphony — by testing and analyzing issues that prevent users from being migrated. Issues can range from integrations with third-party software (such as Citrix) to certain drivers, Windows Virtual Desktop issues, macro compatibility with older versions of Office, etc.

When these issues are discovered and the fixes are created, they are added to the repository for the migrations to proceed smoothly. Since not all fixes can be performed automatically, i.e. the user needs to run into the issue first, those fixes can be accessed by the user in several ways. One of the features of Access Symphony is its ability to create a knowledge base with the known issues and fixes that are discovered during the engineering phase. When users come across an issue, they can find the relevant help articles, search the knowledge base to find their answer, or even create a ticket right from their device with a video/image capture of the issue.

Even with proper planning and testing, not all issues will be mitigated before the migration is completed, and some will only be discovered afterward. Using the integrated ticket system, when a new issue is discovered by a user, they can submit the ticket immediately to get support from IT faster.

If an issue causes a disruption in Business-as-Usual, an immediate fix is needed. However, the reality is that it can take a significant amount of time to research a proper fix, find the root cause, and then rectify the problem. In cases like that, a generic fix can be used. For instance, a threshold can be set for the usage of memory, CPU, etc., and if an app spikes the memory or CPU usage, Fix Engine can clean up and restart the app. In cases where the fix can be discovered quickly, it can be added to the Access Symphony platform.

During any IT migration project, you want your enterprise to have the tools and ability to keep on time and on budget and be able to react to curveballs as they are thrown, without having too much interruption and downtime. Between our repository of fixes and the ability to make tactical fixes as issues arise, you can be sure your business units will be able to continue business as usual.

When it comes to modern app management, a lot has changed in the last few […]

Automation Is Now The Cornerstone Of IT Transformation

IT organizations have transformed significantly over the past 20 years. To stay relevant, enterprises have […]

Reduce Your IT Support Tickets With Automated Self-Service

According to a Zendesk study, organizations receive an average of 492 tickets per month — […]

Our free demonstrations provide you with the key features and functions of the products that matter most to you. Whether it is application packaging and testing, creating actionable insights, performance visualization and monitoring, we can help show you how to enable your modern desktop.